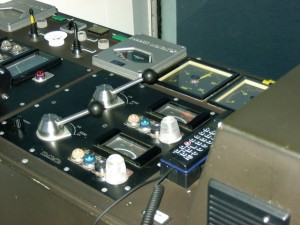 This pictures was taken on the bridge of a Danish vessel. Visible are: two handles, two meters, 2 times two control lights (yellow and blue) and 2 times two buttons (black and red). Note that the red buttons are covered with small cups usually used for liquid medicine.
Reason for this is the following: The black buttons have the function “take control” while the red buttons are emergency stops. When the officer on watch is using the thrusters in the harbour alongside a quay, he is usually standing in a position where he has his back turned to the control panel and his front to the window looking out of it. The only difference between the two buttons with quite a different functionality is their colour. And it is very difficult to see the colour if you have your back turned towards the buttons. It has happened that the officer on watch pressed the wrong button causing a full emergency stop at a very critical moment while actually he needed the power from the thrusters. To prevent this from happening, the crew have placed these cups over the emergency stop buttons.