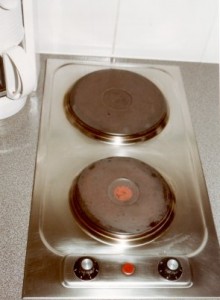 On our holiday in the Alps we found this classical example in our rented house. Apparently they still exist, absolutely no clue is given which knob operates which heater. And only one light indicates that either of the two (or both) heaters is switched on.

My wife knew that as we read from left to right and top down, the left hand knob had to operate the top heater, which was correct, but still, we frequently made a mistake. The best solution is to have the knobs arranged the same way the heaters are, two knobs below each other. If this is not possible (for whatever reason), two indicators would be useful:

Although you could add a red surface on the right hand knob as to indicate that this one operates the heater with the red circle, you have to be aware that that circle becomes invisible as soon as you put a pan on it. Therefore, the cheapest solution is an engraved line to the heater (see below) 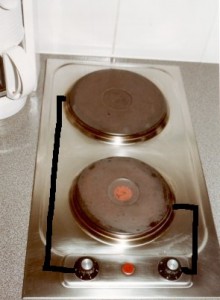 On another holiday we encountered these controls, again for two heaters.

This time an open and a closed circle are used to indicate which heater is operated. But what does that mean, what indicates which is a heater operated, the black closed circle, or the open circle? It turned out that this stove worked the other way around as other stove, the closed circle is the heater that is operated, which means that the left hand control operated the lower heater…. There goes the reading logic!