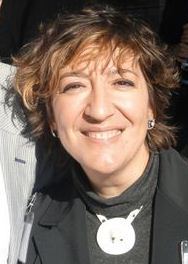 Antonella Toffetti has a Degree in Physics and a Master in Ergonomics.

From 1991 to November 2009, she worked at CRF, The Research Center of FCA, where she gave rise, did grow and led internal and European Cognitive Ergonomics and Product Perception activities. From December 2009 to June 2012, she worked at Fiat Group Automobiles – Research and Development. In particular, Antonella was Head of the HMI Design Group with the responsibility of designing on-board HMI systems and then she was given the responsibility of defining, coordinating activities on ergonomics methodologies and innovation and of organizing the ergonomics knowledge of resources, in collaboration with international partners. Since July 2012, Antonella is Project Manager at STELLANTIS – CRF for Human Machine Interaction/User Experience innovation activities in the field of automated driving and on-board information systems.

Besides her industrial activities, since 1999, she has been teaching courses at university on Cognitive Ergonomics, User-Centered Design and Human Machine Interaction. Currently, Antonella is visiting professor at Politecnico of Torino, Automotive Engineering Degree, chairing the course ‘Cognitive Ergonomics and Human Machine Interface/Interaction’.